This machine was part of RedIRIS , the Spanish Academic and Research Network and was used in the late 198x, and first 199x. 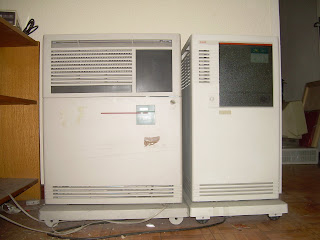 The box in the left is the Main CPU, at the RIGHT there is hard disk cabinet.

The machine has 64Mb, of memory and was used mainly to provide Internet/OSI related services to the Spanish Research Community.

The machine was used, for example, to keep the X500 directory (LDAP is based in this protocol), and also to provide email (not only SMPT/TCP services, also X.400 ).

Also it's very likely that the first DNS server for the ".es" Top level domain were running
in this machine. 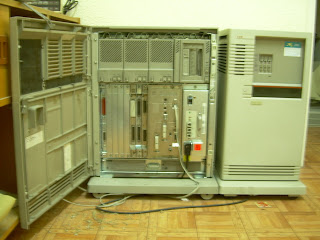 Opening the door we can see that there are three hard disks (one seems to be broken),
ethernet (RJ-45/BNC) connection, console connection (with the typical DEC connector) and some serial card for consoles and serial connexions to other hosts.
Posted by Paco at 11:13