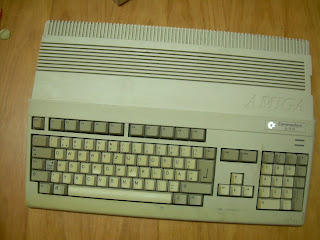 This is another historical computer , a commodore Amiga 500, this was the FIRST commodore with a 32 bit CPU , with a compact style (keyboard, disk drive (800Mb) and CPU in the same box). as it was usual in the MicroComputer.

This wasn't the FIRST 68000 Micro Computer, Sinclair for example launched the QL (Quantum Lap) before, but this was the first successful one.

This computer was very advanced for its time, it has a 3.5 floppy drive instead of tape, and internally it has a dedicated graphic processor and another coprocessor for the sound.

A lot of people organized championship (demo scene) to program special effects with this machine, the operating system (graphical interface ) was another big point.

The machine is a gift from my friends of "Harry el aleman", one of the best places in Madrid to drink German beer
Posted by Paco at 11:15