The original sinclair ZX81 has only a 1kb memory of RAM, so it was quite difficult , but not impossible , to produce any big program, obviously soon there was memory expansion for them and one of those modules was the 16Kb memory extension (usually any image of this blog , compressed and so on it's too big to fit in those memory modules, but in a few years ago 16 kytes of RAM where a lot of space . 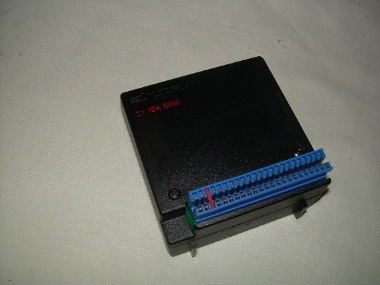 As a curiosity , the three first models of sinclair used the same processor, the zilog z80, so where able to access up to 64Kb of RAM (2^16) , so with the different size in their ROM size (BASIC interpreter, Input/Output routines, etc), produces that the total RAM size of the machines where bigger in the first models (up to 60Kb in the sinclair ZX80, 56 kb in the sinclair ZX81 and only 48Kb in the last model sinclair Spectrum.

After the sinclair spectrum the other models (sinclair spectrum 128, +2, and +3 ) used a technique named "pagination" to share a memory space between different memory banks allowing to have more than 64kb, but not at the same time. 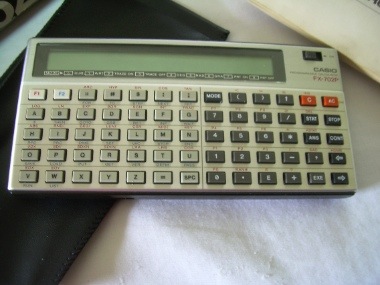 Another calculator from casio, with a BASIC interpreter allowing to develop your own programs, this model has the unusual feature of not using a QWERTY keyboard, and keys are aligned following their alphabetic order in a 7x4 rows

Sinclair made some interfaces to enhance the posibilites of the most successful product, the Sinclair Spectrum , those interfaces include the interface 1 (allow to connect to microdrive units and serial RS-232 interface ) , the ZX-printer interface (thermal printer and this interface, named "interface 2". 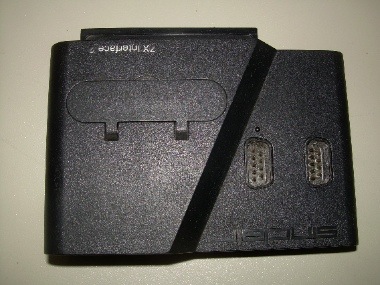 This interface allow to connect two joystick to the spectrum , using the "Sinclair type joystick", that usually links the numeric keys to the joystick and the other facility provided by this interface was the use of memory cards with games and utilities that allow to start running applications and programs without loading them from tape. 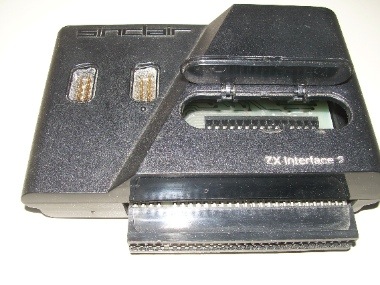 Unfortunately the cartridges were quite expensive so few games were produced in this format, also it was ROM (read only memory) so people can't save their own games in them.

In 1984 sinclair launched the QL, Quantum Lap, as a computer aimed to a more professional sector, it has some revolutionary aspects (it was based in the 68008 Processor, a 32 bit processor with a 8 bit interface, ( 8 bit connectors and hardware was cheaper and price was always one of the basic features of Sinclair machines).


The system has a revolutionary "multi tasking BASIC interpreter", 128 Kb of RAM and instead of using the expensive floppy drives (remember 1984 , 5' 1/4 floppy were still common in 1990, or the slow and sequential tape system (like the spectrum ), uses their own technology , the "microdrive"

Microdrives were in fact small tapes that were inserted in the unit and must be formatted to be ready, to use, allowing to store about 85kb of data.

As the tape runs quite fast, the tape must be formatted in sectors , so it can be used as a random
device (instead of the typical sequential tapes).

Here is the a view o the unit, the QL came with two units

As this machine was targeted to the profesional market it come with a full "Office Software", in four
microdrives and other blank microdrives.

The package was "Quill" (the word processor), Abacus (spreadsheet ) , Archive (Data Base) and Easel (Graphs) that provides most of the usual needs for an normal user.

The machine provides two serial interfaces and was able to connect to other QL machines using their own network protocol (similar to token ring), and be connected to a normal TV or a computer monitor, also has serial interfaces ,

The first years of the 1980 decade was dominated in Europe by sinclair, the company launch a new model of computer every year, changing from the "white" ZX80 , with 1 Kb of RAM, then the ZX81, with provided a better BASIC support , but still only a 1K of RAM , and the next year the Spectrum with
Color !! , and 16Kb of RAM (or 48K in the upper model) . 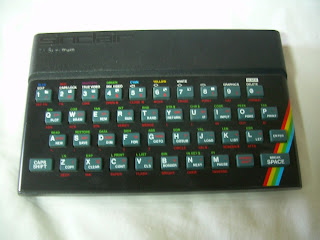 This is the FIRST model of computer that I got, as I told before I "upgraded" the sinclair 48k to Sinclair + (the one two or three post before).

This machine is a gift from a college  after he discovered my not so hidden Computer Diogene Syndrome (recollect all kind of old computers ;-)

About this machine there is few more things to say perhaps that the best Spanish Company started developing games for this platform (Dinamic ) and that more than a generation of Computer Engineers and technical people in Spain grew and learn to play games (and sometimes also some BASIC language ) with it.
The machine was too popular that some radio station used to broadcasts games that the user save in a normal tape , loading the games from the tape. 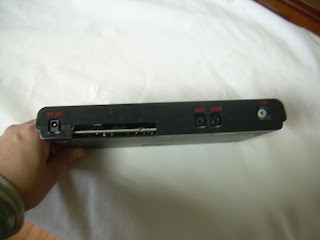 here you can see, from left to right the power connector, expansion slot and the plug for saving and loading files from a normal tape.
Posted by Paco at 22:55 No comments:

This was the third computer that I got , after the beloved Sinclair Spectrum and a CASIO FX-750 calculator with a BASIC interpreter. It was bought in Summer of 1989 , and it was a big jump , compared with the old spectrum , not only in size, but also in the use of disk and the hard disk
(20 Mbytes).

The monitor was monocrome (orange one), with a mixed CGA/Hercules card and an amazing memory of 768 Kb, (640Kb of normal RAM used by MS-DOS and another 128Kb that only with MS-DOS 5.0 and the special software "Qemm" where possible to use for driver.

The Operating System was old MS-DOS 3.30 ,and also in the following years I upgraded the machine to other Operating Systems up to MS-DOS 6.2 , installed the "stacker driver", (to duplicate the hard disk space), and played a lot with it.

I remember also to play with the minix 1.x operating systems (booting from the 360Kb disk drive) and also booting the MS DOS 1.1 , that don't provide the "subdirectory feature (it was mostly a clone of the CPM operating system, other software that runs in this machine was the microsoft windows (from 1.x to 3.11), the GEM Desktop (digital research clone of MacOS graphical environment) and so on.

This was the first computer that I got, in 1984, the current keyboard is newer , as it was purchased as a normal sinclair and late converter to the "plus" one (the only difference was the keyboard). 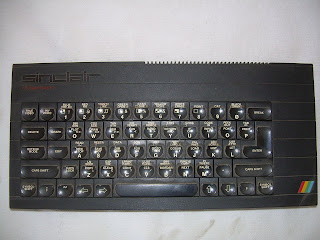 The machine has a zilog z80 microprocessor and has 16kb of ROM and a RAM memory of 48Ks, including 6912 bytes for the graphics display and other system variables so only about 40,5 kb where employed normally for games and software.

The programs where loaded from a tape (I still have too much tapes full of programs ;-), and it was possible to program in BASIC and machine code, the graphic resolution was not great , but some of the programs are still amazing .

In order to save RAM space the BASIC interpreter assingned one of the ASCII code to each of the language keyworks, so for example the "print" command employs only a a byte of memory. A complicated combinations of keystrokes allow to produce all the symbols, one of the various emulator was named "JPP" , due to the fact the "J" key directly puts the "load" command and the double quotes wre in the "P" key so JPP was roughtly load "" , the order to load any program form the tape. 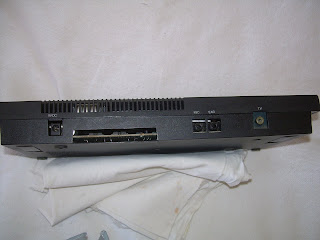 In this picture you can see the power plug for the external power adaptor , the expansion slot and the tape plugs for connecting the machine to and external tape. Later sinclair models (+2) have the
tape incorporated to the machine.

I'll try to find all the hardware (for example a game save device, parallel port, etc) that I 'd for this machines

The most usual problem with this macine was the keyboard, under the plastic cover in the Spectrum 16k and 48k, there were this plastic membrane that was easily broken when you tried to play games, and the only solution was to replace it. 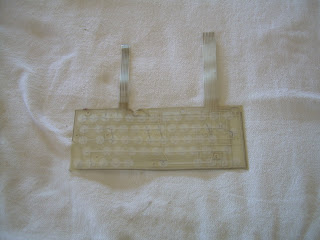