another machine that was literally going to the trash, I found it in a debris container in the street, a homeless was scavenging copper cables when I saw the four RJ-11 connectors, so I got
it, unfortunately without the power adapter that it seems that have a non-standard connector.

The router was covered with white stucco and after carefully removed most of them (still some in the photos) , I found the name of the vendor. 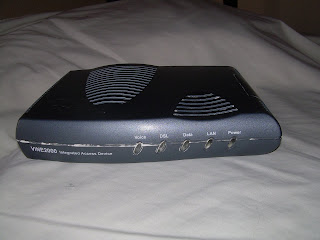 It seems that this router was used mainly by Jazztel an Spanish ISP, when installing xdsl connection in the professional lines, the ISP don't give the configuration password to the users, but as usual the credentials are easily found in Internet.

The four RJ11 connectors don't provide VoIP connections (at least no real VoIP), only allow to connect normal phones to the line. 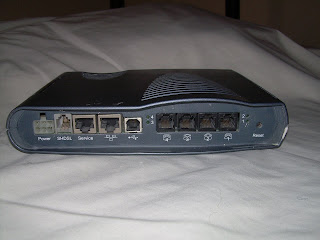