Apple II : lying in the trash

Sometimes strange things happens , Yesterday I was in the terrace of a Bar drinking a beer with some friends, when a bum started to dig in the trash of a container near our table, he found some computer element and started to try to break a solid square box to remove some cables, after some attempts he leave the container.

After a few minutes I went to the container and what was lying there ? .... a very old Apple II Europlus system, with two 5 1/4 floppy drive !!! 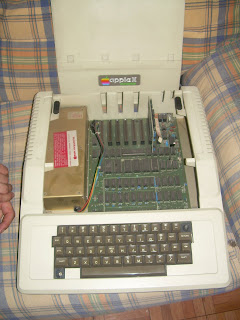 It seems that some keys are missing but my first impression is that the motherboard and floppy controler would work, I will loook for some TV cables to connect the system to the TV and see if nice machine still works.

Unfortunately the floppy cables has been removed, so I will try to build a new ones for the floppies.

About the apple II , this was the second machine build by apple, this machine have a 8 bit processor , and apple start to sell this model several years before the first Mac.
Posted by Paco at 18:04